A Sister Story: All For Good

My husband and I were married after college graduation. We both had good jobs. We bought a house and over time had three children. Through all of this, there were good times, but gradually we began to experience more and more tough times. Nearly every week there was some kind of explosive argument, and sometimes it would become physically violent. I let things slide and gave up more of myself in order to have peace. Wearing my mask, I tried to show the world that everything was all right. Instead of reaching out for help, I turned to alcohol to numb the pain I was living in. My husband drank a lot, too. He didn’t need alcohol to be angry; it just made him angrier. As time went by, his antagonism increased. He would often pick on our oldest son, who could do nothing right in his eyes. If I interjected in any way, he’d just get angrier. Signs of anxiety and depression began to develop in all three children and myself. Finally, God intervened, and I found myself laying down my life and asking Him to take over. Rather than numb my feelings, I allowed myself to feel them and identify where they were coming from. I prayed for the healing and recovery of our marriage. I sensed my husband was angry that I was changing in response to God. As he lost control over me, his behavior became even more erratic and his picking on our kids got worse, sometimes even physically violent with our oldest son. Over the next six months, two reports were filed with the DCF. The number of counseling sessions increased dramatically: individual, couples, family. My husband knew just what to say in the sessions to fool the counselor into thinking that he had nothing to do with the problems. He would often twist things around later, using things against me or the kids. I began to attend Hagar’s Sisters and started reading the curriculum. After the first few pages, I realized I wasn’t crazy, and after the first meeting, I realized I wasn’t alone. It was a very sad moment when I saw the “Power and Control Wheel” for the first time and recognized that my husband had used every type of abuse listed to exert his power and control over me. I learned about the cycle of domestic abuse that my children and I had been experiencing for years. As I’ve continued with Hagar’s Sisters, I’ve learned that it’s not my job to rescue people and that I don’t need to wear a mask – I’m good enough, just as I am, in Christ. My children and I are healing, slowly but surely, and I trust God is using all of it for good. I’ve been able to forgive my ex-husband. I’ve learned that forgiveness doesn’t necessarily mean reconciliation, though, so I’ve been able to successfully detach and move forward.  I’m making tremendous progress with help from God, my dear Sisters in Christ, and Hagar’s Sisters’ amazing program.
Donate

Be Inspired, Learn, Take a Stand

Join our email list if you would like to receive occasional information about upcoming events. For questions please call (978) 266-0053.
Your generous donation helps Hagar's Sisters reach 140 new women! 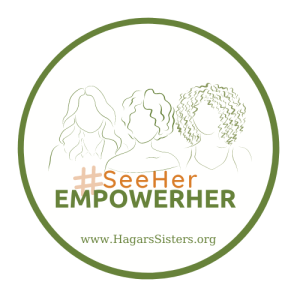